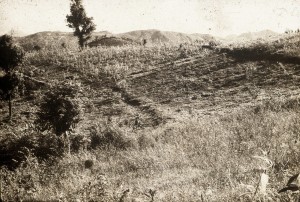 People had stopped cultivation since there was no top-soil left in this land.

When Gopalakrishnan and Vijayalekshmi started their experiments in natural farming at Sarang, they didn’t have any book knowledge of alternative farming and had no guidance. But their experiences of living and working with their agricultural families were deeply rooted in them. Once they started working on the land all their instincts came alive. They also walked all over Attappady and traveled afar, learning farming practices, suitable for their land, from old farmers. Slowly their experiences metamorphised into innovative work on the Sarang land.

In 1983, when the Sarang family bought it, the land was poor due to the ploughed soil being continuously exposed to rain year after year. Through their work in the field Gopalakrishnan and Vijayalekshmi understood that tilling or ploughing, a soil preparation method widely used, was unsuitable for steep sloped areas since it helped soil erosion. 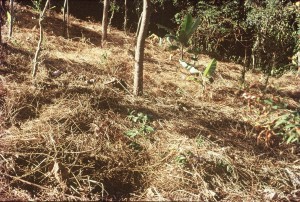 By experimentation they found that mulching with biomass had great effect on the soil condition. Mulching helped to retain moisture, controlled soil erosion and facilitated growth of microorganisms. When after mulching the soil with available local material  a variety of gram and grain were sowed without ploughing only the gram sprouted but not the grain.

The family used small pit latrines which were covered up with soil after use. This significantly added to the enriching of the soil. Green gram, a legume, was grown to enrich the soil. Percolation pits were dug to retain rain water in the ground. On continuing to mulch along with these activities, in 2-3 years the surface soil became loose and rich. Eventually grains which were sown started emerging. 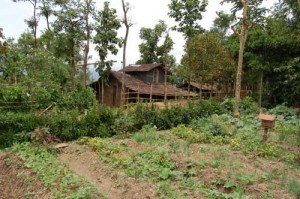 The initial 5 years were spent in ‘cultivating soil’ and nourishing it using these techniques. Eventually, the top soil became black, fertile. From then onwards, pulses and grains needed for the family were produced on the farm itself.

Now the once barren land has rich top soil with the depth of two feet and is even ready for the rain-fed cultivation of paddy.

According to the rain pattern, crops can be cultivated twice a year (May to September and September to October). A mixture of pulses and grains (black gram, green gram, cow pea etc and maize, millet, sorghum etc) are grown as per the needs of the household. Banana, elephant foot yam, pumpkin, and other vegetables are grown. Varieties of wild bitter gourd and tomato which were self seeding grow with zero attention. 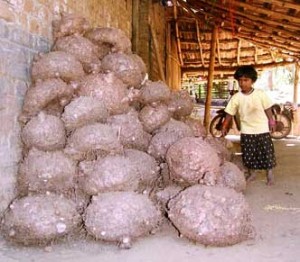 Even in the satellite centers the children are learning the basics of natural farming by cultivating vegetable patches, experimenting with seeds, working on the land whenever possible and keeping their minds as fertile as the land.