The Bamboo Guest House in Sarang

When we started the work in November 2018 our major worry was another building incomplete due to lack of money, time or resources. So our initial plan was a small shed with a loft for people to sleep. Something that can accommodate 8-10 people. Saji and his team, after seeing the abundance of Bamboo in the campus encouraged us to build something bigger. He was very confident about completing it. Thus we expanded our shed to a two-story guest house. We left the design according to Saji’s imagination.

The time or resources estimated for the expanded version proven unrealistic very soon after we started off this path. Thanks to Gautham’s job, also some timely help from friends and family, we could reach this stage. The kitchen and the compost toilet are still under construction. We hope to finish them in a couple of weeks.

As you can see for yourself, Saji and his team have done a great job with Bamboo, plywood, wood, and steel. We are glad to see a major chunk of the expense was wages, and that went to the families of the workforce.

We are also working on the data of the project. (One question we get all the time is the per square feet rate.) Studio Commune of Thiruvananthapuram is also helping us in this regard. 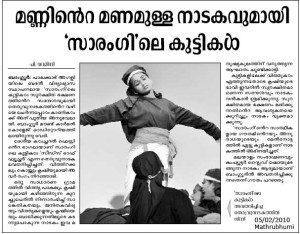 Mathrubhumi newspaper features the Sarang students at the Kalpathy Sangeetholsavam. We attended all the concerts during the music festival.

Deccan Herald published a small piece on Gopalakrishnan & Vijayalekshmi’s interaction with journalists in Mysore on April 22, 2012.