In the year 1979, a young couple, fresh hand teachers just out of teacher training college, were faced with injustice and inaction everywhere they turned. They saw the keepers of justice lax in their duties and teachers who should have been models to their students involved in all sorts of debauchery. There developed in their hearts a deep-seated realization that something was wrong with the society around them.

Sarang was started as a basic school by this teacher couple to provide remedial classes for academically weak children. Eventually, they realized that it is the education system that was weak in content, usefulness and adaptability rather than the children going through it. They found that the flaws of the present education system have a major role in the increasing criminalism in the present society. Ruthless standardization and competition destroys the creativity, individuality and humanity of children. 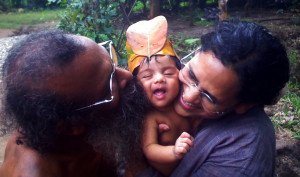 With the realization that a family remains incomplete without children they conceived their first child, learning about children together, dreaming about the child to come, and nurturing him in their minds. It was then that they realized they did not want their child to go through an education system which created educated criminals.

This young couple was Gopalakrishnan and Vijayalekshmi. Sarang Alternative School evolved as an answer to their quest for an education system that would allow their own child to grow into a good human being, responsible and responsive to the society. 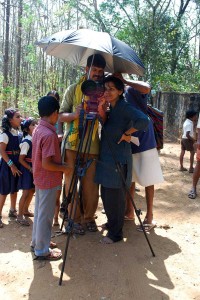 Gautham and Anuradha while the shooting of ‘Moorikkalam’, a short film

Gautham Sarang (34) is the only child who could go through Sarang’s curriculum continuously. He has traveled extensively as part of his studies and handles six languages with ease. He has worked as a contract labourer, photographer, milkman, taxi driver, blacksmith, percussionist, actor, skilled labourer, web designer, and project coordinator, as part of his education and to support the large Sarang family. Anuradha  completes him. Their marriage was a simple function.  Visit their wedding site at http://we.saranghills.org

Sarang was conceived and developed around Gautham. The Sarang couple learned and unlearned many things observing him growing up. As a young child, Gautham had the opportunity to interact with people from different walks of life. He learnt by observing, imitating and analyzing all that came across his path.

At the age of 7, he surprised his parents by deciding to participate in the 100-day march to “Save Western Ghats”. Along the way, he wrote down his observations on environmental destruction, proving that children are capable of empathizing with their surroundings.
Gautham and Anuradha are working hard to take Sarang to the future under the guidance of Gopalakrishnan and Vijayalekshmi. 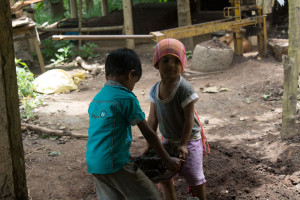 Hiranya the three year old daughter of Gautham and Anuradha is learning life by living it. She stays with her parents on the hill top. Parthan is the second child of this couple. He is six months old when this post is created. Both of them were born at home. Gautham acted as the ‘mid wife’ while Vijayalekshmi supervised the delivery. They had taken all necessary precautions in case of an emergency before choosing delivering their babies at home.

Along with Kannaki and Unniyarcha, the Sarang sisters, there are seven more children at Sarang’s satellite campus. Their age group is from 10 to 20. Their parents are farmers, daily wages workers and from villages. Though all of them did not have a holistic vision about their children’s education when they sent their children to Sarang, all had the wish to see their children grow into good citizens in common. Journeying with Sarang has been a learning or rather de-learning experience for them and they too are now part of the Sarang team.